Louis Thuriot (Belgium) started dancing at the art school in Brussels. He continued his studies at the Rotterdam Dance Academy, Codarts. Currently he is working for the company Club Guy and Roni / Poetic Disasters Club. In 2016, he won the second prize for choreography for his solo Balance at the Solo Tanz Competition Stuttgart. In that same year, he also won the first prize at the Brussels contemporary solo competition. 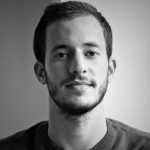