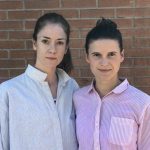 Anna Jacobs & Hanna van der Meer (the Netherlands) are dancers and choreographers, who met at the Rambert School of Ballet and Contemporary Dance in London. They both began their professional training in the Netherlands; Anna at the Dutch National Ballet Academy, Amsterdam and Hanna at ArtEZ, Arnhem.

They have been working together creatively since 2012 and always work in collaboration with other forms of art and design. Since 2017 they began working under the name Lunatics & Poets, an interdisciplinary movement studio, which uses a physical language to create images and moments that re ect and question identity and how that forms the basis of how we perceive the world.